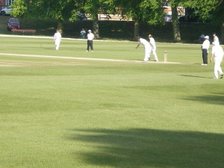 Five Wickets For Colin Judd In Defeat For The 2nd Team Away At West Haddon & Guilsborough.