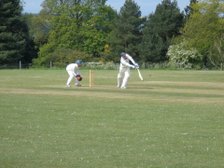 Saturday 8th August 2015
Northants Cricket League Division 4
Geddington 2nd XI V Podington 1st XI
Geddington won by 9 wickets.
Podington (4pts) 187 45 Overs, Geddington (25pts) 188-1 34.1 Overs
Picture:Steve Toseland scoring 79 with the bat for Geddington 2nd Team against Podington 1st Team.
Geddington 2nd Team got back to winning ways with a 9 wicket win over Podington 1st Team at Geddington Cricket Club.
Half-Centuries from Steve Toseland (79) and Charlie Gingell (88*) guided Geddington to the win as they reached their target in the 35th over, Toseland & Gingell put on 184 for the 1st wicket partnership, before Toseland was out with the home side just needing 4 runs to win the match.
Earlier, Brando Biddle (4-33) was the pick of the Geddington bowlers with four wickets as Podington were All Out for 187 in 45 overs, Marcus Knight (2-38) and Mark Pearson (2-40) both picked up two wickets each for the home side and there was also one each for Ned Wilson and Lee Sutherland. Sam Sturley (33) top-scored for the visitors in their innings, Jamie Russell (27), Kieran Fowler (24) and Craig Fowler (23) were also in the runs.
Share via
FacebookTwitter
https://www.pitchero.com/clubs
Recent news