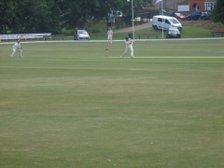 A Brilliant Unbeaten Century From Gingell Guides 2nd Team To Victory Over Wicken.

Saturday 22nd August 2015
Northants Cricket League Division 4
Geddington 2nd XI V Wicken 1st XI
Geddington won by 6 wickets.
Wicken (8pts) 204 50 Overs, Geddington (25pts) 206-4 42.4 Overs
Picture:Charlie Gingell scoring 133 not out for Geddington 2nd Team against Wicken 1st Team.
A brilliant unbeaten century from Charlie Gingell guided Geddington 2nd Team to a 6 wicket win over Wicken 1st Team at Geddington Cricket Club.
Gingell top-scored with an unbeaten 133 which included 23 fours and 1 six in his innings for Geddington as they reached their target with 7.2 overs to spare. The home side were 23-3 in reply after David Pollard (3-35) took three early wickets for Wicken, but then the recovery began with Gingell and Mark Pearson (32) putting on 76 for the 4th wicket partnership, before Pearson was out with the score on 99-4. But then the match winning partnership between Gingell and David Goodjohn (18*) putting on an unbeaten 107 for the 5th wicket to guide the home side to victory.
Earlier, M Pearson (3-35) and Brando Biddle (3-69) both took three wickets each for Geddington as Wicken were All Out for 204 in 50 overs, Brandon Holmes (2-38) also took two wickets for the home side, Phil Peel also picked up a wicket which was his 100th in the Northants Cricket League for Geddington. Adam Wirth, Aidan Ennis, Lee Wootton and Brendan Pollard all scored 28 with the bat for the visitors.
Share via
FacebookTwitter
https://www.pitchero.com/clubs
Recent news