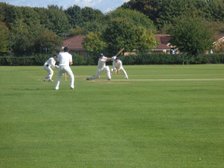 Picture: Danial O'Callaghan top-scoring with the bat for Geddington 2nd Team at home against Finedon Dolben 3rd Team.
Saturday 22nd April 2017
Northants Cricket League Division 4
Geddington 2nd XI V Finedon Dolben 3rd XI
Match Result: Geddington won by 1 wicket.
Finedon Dolben (10pts) 131 32.4 Overs, Geddington (30pts) 132-9 32.5 Overs.
Geddington 2nd Team won a nail-biter as they claimed victory by 1 wicket in their first league match of the season at home to Finedon Dolben 3rd Team.
Finedon Dolben won the toss and batted first and were All Out for 131 in 32.4 overs, Sanjay Patel (26) top-scored with the bat for the visitors, Raj Patel (21) was the only other batsman to get past the twenties mark. James Schofield (4-41) was the pick of the Geddington bowlers with four wickets, Marcus Knight (2-0) and Ned Wilson (2-9) also both took two wickets each with the ball for the home side and there was a wicket each for Jack Connelly (1-12) and Cole McWilliam (1-23).
In reply, Liam Creighton (6-54) took six wickets with the ball for Finedon Dolben, as Geddington reached their target in the 33rd over with 9 wickets down as Sam Smith (14*) and Connelly (1*) put on an unbeaten 8 run partnership for the last wicket to guide them to a 30 point win, Danial O'Callaghan (35) top-scored with the bat for the home side.
Share via
FacebookTwitter
https://www.pitchero.com/clubs
Recent news