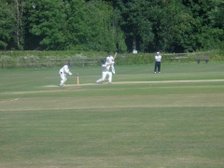 O'Callaghan Hits An Unbeaten 91 With The Bat As The 2nd Team Make It Two Wins Out Of Two Games.

Picture: Danial O'Callaghan scoring 92 not out with the bat for Geddington 2nd Team away at Podington 1st Team.
Saturday 29th April 2017
Northants Cricket League Division 4
Podington 1st XI V Geddington 2nd XI
Match Result: Geddington won by 6 wickets.
Podington (5pts) 129 36.1 Overs, Geddington (22pts) 130-4 22 Overs.
Geddington 2nd Team made it two wins out of two league games with victory by 6 wickets away at Podington 1st Team on Saturday Afternoon.
Danial O'Callaghan scored an unbeaten 91 with the bat an innings included 14 fours and 2 sixes as Geddington reached their target of 130 with 4 wickets down in the 22nd over. O'Callaghan and Ned Wilson put on 67 for the 3rd wicket partnership after being 4-2 in the reply, James Bye (14) was also in the runs for the visitors. David Dicks (2-15) took two wickets with the ball for Podington, Joshua Ozier (1-24) and Liam Souster (1-43) picked up the other two wickets to fall.
Earlier, Podington were All Out for 129 in 36.1 overs, Lee Smith (3-28) was the pick of the Geddington bowlers with three wickets, Wilson (2-4) and Mark Neave (2-4) also picked up two wickets each and there was also a wicket each for Cole McWilliam, Sam Smith and Jack Connelly. Tom Garlick (47) top-scored for the hosts and David Watts (31) was also in the runs for the home side.
Share via
FacebookTwitter
https://www.pitchero.com/clubs
Recent news