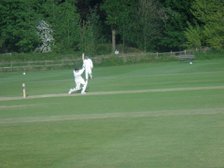 Match Picture: Marcus Knight during his unbeaten innings of 32 with the bat for Geddington 2nd Team against Grendon & Prims 1st Team.
Saturday 13th May 2017
Northants Cricket League Division 4
Geddington 2nd XI V Grendon & Prims 1st XI
Match Result: Geddington won by 4 wickets.
Grendon & Prims (11pts) 239 49.4 Overs, Geddington (30pts) 242-6 48.2 Overs.
Geddington 2nd Team bounced back from their heavy defeat last weekend with a 4 wicket win at home to Grendon & Prims 1st Team on Saturday.
Grendon & Prims batted first and were All Out for 239 in 49.4 overs, Oliver Hanwell (85) and Dan Wood (70) both scored half-centuries for the visitors, Wood and O Hanwell put on 131 for the 2nd wicket partnership, Nick Colbourn (24) was also in the runs with the bat. Mark Pearson (6-28) was the pick of the Geddington bowlers with six wickets, Colin Judd (2-11) also took two wickets with the ball for the home side and there was also a wicket each for Lee Smith and Jack Connelly.
In reply, Judd (68) and Lee Sutherland (65) both scored half-centuries with the bat for Geddington, both Judd and Sutherland put on 92 for the 4th wicket partnership after being 51-3, but in the end it was Marcus Knight (32*) and Sam Smith (28*) who both put on an unbeaten 57 partnership for the 7th wicket to guide the home side to victory with 10 balls to spare and 4 wickets in hand. Brian Bartlett (3-25) took three wickets with the ball for Grendon & Prims, O Hanwell (2-57) also took two wickets for the visitors.
Share via
FacebookTwitter
https://www.pitchero.com/clubs
Recent news