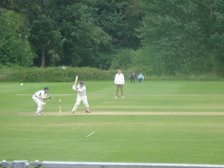 Picture: Danial O'Callaghan scoring 118 off 62 balls with the bat for Geddington 2nd Team in their win at home to Podington 1st Team.
Saturday 15th July 2017
Northamptonshire Cricket League Division 4
Geddington 2nd XI V Podington 1st XI
Match Result: Geddington won by 173 runs.
Geddington (30pts) 294-9 50 Overs, Podington (4pts) 121 27.1 Overs.
A Century from Danial O'Callaghan and a half-century from Mark Thomas with the bat guided Geddington 2nd Team to a 173 runs victory against Podington 1st Team at Geddington Cricket Club on Saturday.
Geddington batted first and made 294-9 off their 50 Overs, O'Callaghan scored 118 with the bat off 62 balls in an innings which included 19 fours and 2 sixes, Thomas (84) was also in the runs with a half-century in an innings which included 11 fours and 1 six, both Thomas and O'Callaghan put on 171 for the 3rd wicket partnership. Kieran Fowler (4-59) took four wickets with the ball for Podington, there was also three wickets for Ian Hart (3-60).
In reply, Podington were All Out for 121 in 27.1 overs, Cole McWilliam (3-23) and Marcus Knight (3-31) both took three wickets each with the ball for Geddington, there was also a wicket each for Jack Connelly (1-5), Mark Neave (1-13) and Lee Smith (1-35), there was also run-out from O'Callaghan for the home side. Adam Tee (64) top-scored with a half-century with the bat for the visitors, Tom Hart (31) was also in the runs.
Geddington 2nd Team are now only 17 points behind Bowden in the Northants Cricket League Division 4 promotion race after yesterday's win and Bowden draw at home to St Crispins & Ryelands 2nd Team.
Share via
FacebookTwitter
https://www.pitchero.com/clubs
Recent news