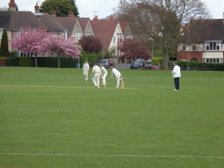 Picture: Mark Neave taking four wickets with the ball for Geddington 2nd Team against Rushton 2nd Team at Geddington Cricket Club.
Saturday 19th August 2017
Northamptonshire Cricket League Division 4
Geddington 2nd XI V Rushton 2nd XI
Match Result: Geddington won by 8 wickets.
Rushton (3pts) 132 45.3 Overs, Geddington (22pts) 133-2 25.4 Overs.
Geddington 2nd Team made it 10 wins in the league for this season with victory by 8 wickets against Rushton 2nd Team to maintain their promotion push with 4 league games left at Geddington Cricket Club on Saturday.
Mark Neave (4-25) took four wickets with the ball for Geddington as they bowled Rushton All Out for 132 in 45.3 overs, Lee Smith (3-33) also took three wickets, there was also a wicket each for James Schofield (1-13) and Jack Connelly (1-16) and also Connelly got a run-out for the home side. John Pike (41) top-scored with the bat for the visitors.
In reply, Geddington reached their target of 133 in the 26th over with 2 wickets down, Colin Judd (56) top-scored with a half-century in an innings which included 11 fours, before Mark Thomas (25*) and Danial O'Callaghan (17*) guided the home side to victory, Thomas and Judd put on 84 for the 2nd wicket partnership after being 17-1 early on. Dean Joy and Gary Callaghan both took a wicket each with the ball for Rushton.
Share via
FacebookTwitter
https://www.pitchero.com/clubs
Recent news