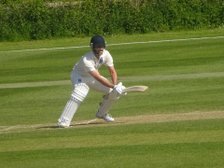 Defeat For Geddington 2nd Team away at Irchester 1st Team.

An unbeaten century from Thomas Duxson (135*) in an innings which included 13 fours and 4 sixes top-scored in Irchester's 266-4 off their 50 overs, Joe Morton (67) also scored a half-century with the bat for the home side, Duxson and Morton put on 132 for the 3rd wicket partnership. Lee Smith (13-8-17-2) took two wickets with the ball for Geddington, there was also a wicket for Ned Wilson and a run-out from Ben Templeman for the visitors.

In reply, Geddington were All Out for 153 in 40.5 overs, Chris Harrison (69) top-scored with a half-century for the visitors, Charlie Gingell (42) and Cole McWilliam (25*) were also in the runs with the bat, Harrison and Gingell put on 94 for the 2nd wicket partnership before wickets fell at regular periods. Duxson (4-18) took four wickets with the ball for Irchester, there was also three wickets for Nathan McDonald (3-23) and a wicket each for Scott Lawson, Tom Legg and Harry Green for the home side.