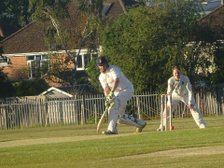 Geddington batted first and made 340-3 off their 50 overs, Mark Thomas (106*) top-scored with an unbeaten century for the home side, Chris Harrison (94) and Steve Toseland (68) also made half-centuries, Lee Sutherland (30*) was also in the runs with the bat, Harrison and Thomas put on 151 for the 1st wicket partnership, and then Thomas and Toseland put on 142 for the 2nd wicket partnership for the hosts. George Martin (2-78) took two wickets with the ball for Oundle Town.

In reply, Matthew Ingram (142) top-scored with a century for Oundle Town in their 268-7 off their 50 overs, Martin (35) and Mark Davies (21*) were also in the runs with the bat for the visitors, Ingram and Martin put on 126 for the 6th wicket partnership after being 113-5 early on in their innings. Marcus Knight (3-50) took three wickets with the ball for Geddington, there was also a wicket each for Sam Smith, Jack Connelly, Lee Smith and Joshua Knight for the home side.