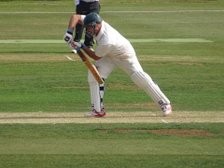 Cameron Braans Stars With Bat & Ball For Geddington 2nd Team In Their Win At Home Against Irchester 1st Team.

Geddington 2nd Team bounced back from last weekend's defeat with victory by 76 runs against Irchester 1st Team at Geddington Cricket Club on Saturday.

Geddington batted first and made 232-5 off their 50 overs, Cameron Braans (87*) top-scored with an unbeaten half-century, Sam Smith (47*) and Lee Sutherland (43) were also in the runs with the bat for the home side, the hosts were 99-5, before an unbeaten 133 for the 6th wicket partnership between Braans and S Smith got the total up to 232 without anymore wickets falling. Scott Lawson (2-14) and Jack Woods (2-59) both took two wickets each with the ball for Irchester.