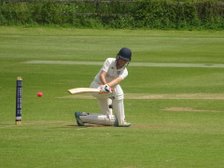 In reply, Ounde Town reached their victory target with 19 balls to spare and 3 wickets down, Jonathan Dalley (52) and Martin (50*) both made half-centuries, Matthew Ingram (44) and Guy Bolsover (41) were also in the runs with the bat for the home side, Ingram and Dalley put on 101 for the 1st wicket partnership. Colin Judd (2-41) took two wickets with the ball for Geddington, there was also a wicket for York for the visitors.