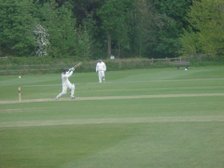 Geddington 2nd Team made it two wins in a row with victory by 24 runs against Stony Stratford 2nd Team at Geddington Cricket Club on Saturday.