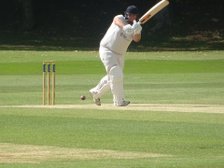 An Unbeaten Century From Geddington 2nd XI Captain Chris Harrison Guides Them To Victory Away At Oundle Town 2nd XI.

New Geddington 2nd Team Captain Chris Harrison was the star performer with the bat, by scoring an unbeaten century in their 9 wickets victory against Oundle Town 2nd Team at Oundle Town Cricket Club on Saturday.

Harrison top-scored with an unbeaten 110 off 117 balls, in an innings which included 14 fours and 4 sixes, for Geddington as they chased their victory target, with the loss of just 1 wicket, and 5 overs to spare, Mark Thomas (63) also made a half-century for the visitors, with Harrison and Thomas putting on, an opening stand of 161 for the 1st wicket partnership. Nehal Patel (8-3-21-1) was the only wicket taker with the ball for Oundle Town.