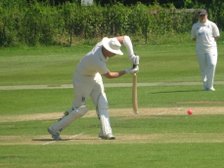 Geddington 3rd XI were defeated by 4 wickets in the Final of the Northamptonshire Cricket League Division 8 KO Cup, against Long Buckby 2nd XI at Geddington Cricket Club on Saturday.

In reply, an unbeaten half-century from Richard Colton (62*), and an unbeaten knock from Church (17*) both them putting on 61 not out for the 7th wicket partnership to guide Long Buckby to victory with 4 wickets and 9 balls to spare, earlier Joe Oliver (53) scored a half-century with the bat at the top of the order for the visitors. Bolton (2-20) and Brando Biddle (2-30) both took two wickets each with the ball for Geddington, there was also a wicket for Henry Brandrick (1-20) for the home side.