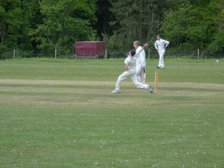 Saturday 13th June 2015
Northants Cricket League Division 11
Geddington 3rd XI V Mears Ashby 2nd XI
Geddington won by 46 runs.
Geddington (27pts) 131-8 30 Overs, Mears Ashby (4pts) 85 24.3 Overs
Picture: Five Wickets for Ned Wilson as Geddington 3rd Team won by 46 runs against Mears Ashby.
As the rain wreaked havoc with the Northamptonshire Cricket League programme as Geddington 3rd Team beat Mears Ashby 2nd Team by 46 runs at Burton Latimer Cricket Club with Ned Wilson the star performer with the ball for Geddington.
Wilson (5-31) took five wickets in his 6 overs for Geddington as Mears Ashby were bowled out for 85 in 24.3 overs, Miles Knight (2-4), Matt Johns (2-14) both took two wickets each for the home side and there was also a wicket for Phil Peel (1-25). Robert Payne (25) was the only batsman to get past the twenties mark for the visitors.
Earlier, Geddington batted first and made 131-8 off their 30 overs, Mark Thomas (55*) top-scoring with an unbeaten half-century for the hosts, Paul Rowden (22) was also in the runs for the home side as both Thomas & P Rowden put on 57 for the 3rd wicket partnership. John Robinson (3-34) was the pick of the Mears Ashby bowlers with three wickets, there was also two wickets for Dimuthu Fernando (2-18) for the visitors.
Share via
FacebookTwitter
https://www.pitchero.com/clubs
Recent news