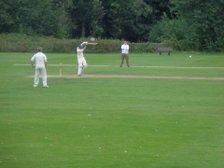 Picture: Ben Templeman scoring a century for Geddington 3rd Team at home to Rushden Town 3rd Team.
Saturday 6th May 2017
Northants Cricket League Division 10
Geddington 3rd XI V Rushden Town 3rd XI
Match Result: Geddington won by 92 runs.
Geddington (29pts) 290-8 40 Overs, Rushden Town (9pts) 198-8 40 Overs.
Ben Templeman and Brandon Holmes were stars with bat and ball for Geddington 3rd Team in their opening day victory by 92 runs against Rushden Town 3rd Team at Burton Latimer Cricket Club on Saturday.
Geddington batted first and made 290-8 off their 40 overs, Templeman (111) top-scored for the home side with a century in an innings which included 21 fours and 1 six, there was also half-century from Miles Knight (53), Harry Bolton (22*) also added some late runs for the hosts and also every batsman bar one reached double figures to get the home side up to 290. Andy Rollings (2-44) and Scott Small (2-46) both took two wickets each with the ball for Rushden Town.
In reply, Brandon Holmes (5-27) took five wickets with the ball for Geddington as Rushden Town finished on 198-8 off their 40 overs, Bolton (1-20) and Mark Pearson (1-30) also took a wicket each for the home side, there was also run-out from Templeman. Small (100*) top-scored for the visitors with an unbeaten century, Jonnny Groome (24) was also in the runs for the away side.
Share via
FacebookTwitter
https://www.pitchero.com/clubs
Recent news