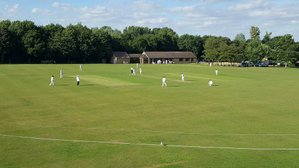 Match Picture: Match Action from Geddington's 3rd Team match against Wollaston 3rd Team at Emberton.
Saturday 1st July 2017
Northamptonshire Cricket League Division 10
Wollaston 3rd XI V Geddington 3rd XI
Match Result: Geddington won by 6 wickets.
Wollaston (6pts) 172 37.1 Overs, Geddington (30pts) 173-4 38.2 Overs.
After no action last week for Geddington 3rd Team they returned to action with a 6 wicket win against Wollaston 3rd Team at Emberton on Saturday.
Wollaston batted first and were All Out for 172 in 37.1 overs, Craig Boddington (55) top-scored with a half-century for the home side in an innings which included 5 fours and 5 sixes, Andrew Monteith (31) was also in the runs with the bat. Brandon Holmes (3-18) was the pick of the Geddington bowlers with three wickets, Archie Colwill (2-4) on his senior league debut took two wickets, there was also two wickets each for Brooklyn Biddle (2-36) and Mark Pearson (2-58).
In reply, Geddington got off to a good start with an 87 run partnership for the 1st wicket between Roger Paterson and Paul Rowden, Paterson (56) top-scored with a half-century in an innings which included 10 fours and 1 six for the visitors, Rowden (36), Miles Knight (22) and Biddle (18) were also in the runs with the bat, before Harry Spence scored an unbeaten 30 to guide the away side to their victory target with 10 balls to spare and 6 wickets in hand. David Ward (2-31) took two wickets with the ball for Wollaston, there was also a wicket each for Nathan Dawson (1-12) and Monteith (1-21).
Share via
FacebookTwitter
https://www.pitchero.com/clubs
Recent news