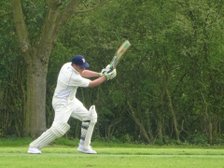 Geddington reached their winning target in just 12 overs for the loss of 1 wicket, an unbeaten 116 partnership for the 2nd wicket between Brodie Biddle (68*) in an innings which included 12 fours and 3 sixes and Dave Wood (48*) guided the home side to victory, Ben Templeman (16) was the only wicket to fall. Conor Barton took the only wicket with the ball for Kettering Town.

Earlier, Matt Knight (7.2-4-11-6) took six wickets with the ball for Geddington as Kettering Town were All Out for 133 in 34.2 overs, Templeman (2-35) took two wickets and there was also a wicket each for Shane Ling and Ben York for the home side. Nathan Robinson (66*) top-scored with an unbeaten half-century for the visitors, Gareth Taylor (21) was the only other batsman to get past the twenties mark with the bat.