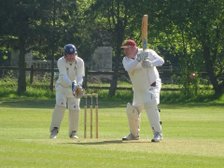 Mark Pearson Stars With Bat & Ball For Geddington 3rd XI In Their Victory Away At Weekley & Warkton 3rd XI.

Picture: Mark Pearson scoring an unbeaten century with the bat and taking four wickets with the ball for Geddington 3rd Team against Weekley & Warkton 3rd Team at Benefield Cricket Club on Saturday.

Geddington batted first and made 229-8 off their 40 overs, M Pearson (111*) top-scored with an unbeaten century in an innings which included 17 fours, Dave Wood (25) and Shane Ling (23) were also in the runs with the bat for the visitors, M Pearson and Ling put on 59 for the 7th wicket partnership. Christian Dalziel (3-39) took three wickets with the ball for Weekley & Warkton, Karl Peasnall (2-42) also took two wickets and there was also a wicket for Stephen Turner.

In reply, Weekley & Warkton were All Out for 159 in 35.2 overs, Peasnall (73) top-scored with a half-century for the home side, Stephen Walton (22) was the only other batsman to get past the twenties mark with the bat. M Pearson (4-29) took four wickets with the ball for Geddington, Archie Colwill (2-14) also took two wickets and there was also a wicket each for Matt Johns, Zachary Byers, Ling and Alex Rowden for the visitors.