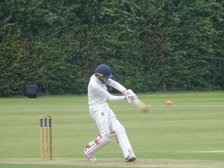 Stanley Kirk Stars With Bat & Ball For Geddington 3rd XI In Their Victory Away At Rushden Town 3rd XI.

Picture: Stanley Kirk taking five wickets with the ball and scoring a half-century with the bat for Geddington 3rd Team against Rushden Town 3rd Team at Dean Oval Cricket Ground.

Kirk (9-2-28-5) took five wickets with the ball for Geddington, as Rushden Town were All Out for 175 in 37.3 overs, Mark Pearson (2-30) also took two wickets and there was also one each for James Hogg, Archie Colwill and Joshua Knight. Henry Steele (58) top-scored with a half-century for the home side, Matthew Wildman (43) and Paul Wildman (34) were also in the runs and both put on 74 for the 8th wicket partnership after being 97-7 early on in their innings.

In reply, Geddington reached their victory target of 176 in 26 overs with 4 wickets to spare, Kirk (68) and Dave Wood (55) both scored half-centuries with the bat for the visitors and both put on 115 for the 3rd wicket partnership after being 19-2. Richard Eady (4-30) took four wickets with the ball for Rushden Town, there was also a wicket each for Steele and Russell Eady for the home side.