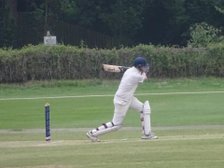 Promotion For Geddington 3rd Team After Victory In The NCL Division 10 Top Of The Table Clash Against Brigstock 2nd Team.

Geddington batted first and made 250-9 off their 40 overs, Ben York (92) top-scored with a half-century for the home side, Joshua Knight (35) and George York (21) were also in the runs with the bat, Knight and B York put on 60 for the 3rd wicket partnership. Oliver Day (3-68) took three wickets with the ball for Brigstock, there was also two wickets for Jamie Mills (2-31) for the visitors.

In reply, Brigstock were All Out for 155 in 35.3 overs. Mark Pearson (4-11) took four wickets with the ball for Geddington including the final wicket to clinch promotion, Joss Boyle (2-31) also took two wickets, and there was also a wicket each for Stanley Kirk, Archie Colwill, James Hogg and Knight for the home side. James Steward (39), Harry Howell (32) and Henry Spencer (31) were all in the runs with the bat for the visitors.