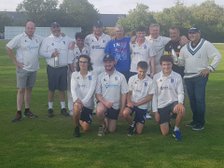 Geddington chase down their victory target of 154 in the 19th over with 8 wickets to spare, Brodie Biddle (92) top-scored with a half-century for the home side, Biddle & Wood (34) put on 107 for the 1st wicket partnership to get the innings off to a good start, before Matt Knight (16*) and James Bye (9*) guided the hosts to victory.

Earlier, Finedon Dolben batted first and made 153-7 off their 40 overs, Owen West (49) top-scored with the bat for the visitors, Darren Moors (36) and Matthew Carroll (26) were also in the runs. Mark Pearson (4-40) was the pick of the Geddington bowlers with four wickets, there was also a wicket each for Knight and Harry Spence, and also a Run-Out from Wood for the home side.

Geddington 3rd XI will go into their final league match of the season on the 1st September away at Kislingbury 2nd XI, a win for the 3rd Team in that match will mean they will go through the whole season unbeaten in Division 10 of the Northamptonshire Cricket League.