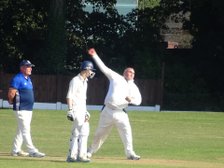 Geddington 3rd Team got their Northants Cricket League Division 9 season off to an opening day victory by 9 runs against Kislingbury Temperance 2nd Team at Burton Latimer Cricket Club on Saturday.

Mark Pearson (10-0-40-7) was the star performer with the ball by taking seven wickets for Geddington, as Kislingbury were All Out for 186 in 40 overs, chasing 196 to win, George York took two Stumpings and three Catches behind the stumps for the home side, Joshua Knight (2-35) and Archie Colwill (1-42) were the other wicket-takers with the ball. Stuart Gill (71) top-scored with the bat for the visitors with a half-century, Wendell Pemberton (39) was also in the runs.