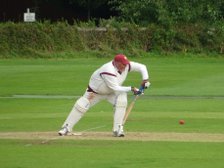 Geddington 3rd Team were defeated by 9 wickets against Thrapston 2nd Team at Overstone Park Cricket Club, in their final of the NCL Division 6 league stage of the season on Saturday.

Geddington batted first and were All Out for 86 in 33.5 overs, Mark Pearson (18) and Steve Toseland (11) were the main run-scorers with the bat for the home side. Thomas Stoker (6-4-4-3) was the pick of the Thrapston bowlers with three wickets, Oliver Bennett (2-7), Tim Sawford (2-22) and Harry Thomas (2-28) all took two wickets each with the ball for the visitors.

In reply, Thrapston reached their victory target of 87, with the loss of 1 wicket in the 20th over, Andy Stoker (39*) and James Loader (32*) both finished unbeaten with the bat for the visitors, both A Stoker and Loader put on an unbeaten 63 partnership for the 2nd wicket. Pearson (4-1-11-1) was the only wicket-taker with the ball for Geddington.