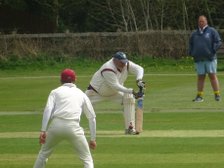 In reply, Brigstock reached their victory target, with the loss of just 2 wickets in the 34th over, H Howell (68*) and Singh (63) both made half-centuries with the bat, H Howell and Singh put on 101 for the 2nd wicket partnership for the visitors. Lewis Skorupa (1-33) took a wicket with the ball for Geddington, the other wicket to fall in the innings was a Run-Out in the field from Ben York for the home side.