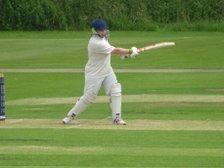 Hanna McDade Stars With Ball & Bat For Geddington Under-13's In Their Victory Away At Weldon Under-13's.

Geddington Under-13's kept their unbeaten form, heading into the last game of the league season next Monday, with victory by 88 runs in their latest match against Weldon Under-13's, at Weldon Cricket Club on Monday Evening.

In reply, Geddington finished on 302-4 off their 16 overs, Hanna McDade (22) top-scored for the visitors, there was also contributions with the bat from Charlie Layer (15, Times Out 1), Henry Brandrick (14, Times Out 1) and Lucy Raubenheimer (12). Taylor Jenkins (2-11) took two wickets with the ball for Weldon, there was also a wicket each for Thomas Holmes (1-8) and Henry Shaw (1-14) for the home side.