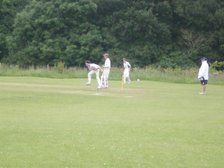 Ned Wilson Stars With The Ball And Bat For Geddington Under-15's In Their Defeat.