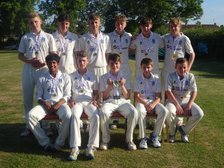 After victory in their first match of the day against Overstone Park Cricket Club, all Geddington had to do was win their final match of the day to become champions and the they did with 13.4 overs to spare and 9 wickets in hand, Cole McWilliam (31* off 17 balls) and James Hogg (15*) guided Geddington to their victory target of 88 with an unbeaten 43 partnership for the 2nd wicket, Sam Smith (20) was also in the runs with the bat. Alistair Brown (1-20) was the only wicket-taker with the ball for Brackley Town.

Earlier, Brackley Town were All Out for 87 in 15.5 overs, Harry Bartlett (17) top-scored with the bat, Ike Arrand (11) was the only other batsman to reach double figures. Akaash Baiju (3-5) and Joshua Knight (3-9) both took three wickets with the ball for Geddington, there was also two wickets each for Ben York (2-15) and Archie Colwill (2-15).