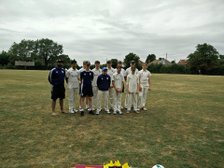 Benedict Harvey & Joshua Knight Score Half-Centuries For Geddington Under-15's To Guide Them Through To The National Midlands Area Finals Day.

Benedict Harvey (50 Retired Not Out off 41 balls) and Joshua Knight (50 Retired Not Out off 46 balls) both scored half-centuries for Geddington as they reached their victory target of 139 with the loss of 3 wickets and 9 balls to spare, Harvey, Knight, Ben York and Stanley Kirk put on 126 for the 2nd wicket partnership after being 2-1, Ben McDade (10*) hit the winning runs for the visitors. William Routledge (2-22) took two wickets with the ball for Thriplow and there was also a wicket for Jack Ranganathan (1-23).

After Sunday's Victory, Geddington Under-15's will now play in the ECB Under-15's National Club Championship Midlands Area Finals Day on Thursday 2nd August and if they win that, they will go on to play in the National Finals Day against Teams from The North, The South & West and London & The East.