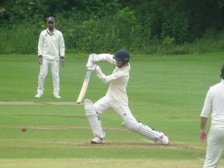 Geddington Under-15's Lose A Super Over Thriller In The Cup, After The Main Match Finishes In A Tie.

A Cup Semi-Final match between Kettering Town Under-15's Whites and Geddington Under-15's at Kettering Town Cricket Club on Wednesday Evening, went down to a thrilling conclusion and had drama all the way through to the last ball of both the super over and the main match, after Geddington got the 2 runs in the main match to secure the tie to take into a super over, Geddington got 7-1 in their one super over, and then Kettering Town Whites got their winning target in the last ball of the Super Over, after needing two for the win with one ball left in the Super Over.

Kettering Town Whites batted first and made 108-5 off their 20 overs, Samuel Tattersall (55 Retired Not Out), in an innings which included 6 fours and 1 six, top-scored with an unbeaten half-century for the home side. Freddy Hodgson (1-10), Henry Brandrick (1-14), Evan Arnold (1-16) and Liam Cully (1-21) all took a wicket each with the ball for Geddington, the other wicket to fall was a Run-out from Arnold for the visitors.

In reply, Jack Edwards (31) and Cully (18) got the Geddington innings off to a good start by putting on 65 for the 1st wicket partnership, before Brandrick scored an unbeaten 17 with the bat, including 8 off the last over to secure the tie in the main match with the score on 108-4 off their 20 overs, and take the game into a Super Over. Aum Patel (4-0-15-2) took two wickets with the ball for Kettering Town Whites, Luke Thompson (1-20) and Louis Judd (1-22) all took a wicket each for the home side.

Kettering Town Under-15's Whites won a Super Over, after the match finished in a tie.