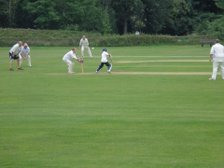 Tuesday 3rd May 2016
Corby & District Youth Cricket League Under-15's Division
Rushton Under-15's V Geddington Under-15's
Match Result: Rushton won by 5 wickets.
Picture: Joshua Knight top-scoring with the bat for Geddington Under-15's away against Rushton Under-15's.
Geddington (0pts) 46-8 16 Overs, Rushton (4pts) 47-5 13.1 Overs.
Geddington Under-15's were defeated by 5 wickets against Rushton Under-15's at Rushton Cricket Club on Tuesday Evening.
Danny Atkinson (4-4) was the pick of the Rushton bowlers as he took four wickets as Geddington batted first and made 46-8 off their 16 overs, Timothy Cook, Liam Kendall, Frederick Frankcam and Connor McCarlie all took a wicket each for the home side. Joshua Knight (19) top-scored for the visitors in their innings.
In reply, Rushton reached their target with 17 balls to spare with 5 wickets in hand, Matt McAllister (16) and Atkinson (11*) were the main run-scorers for the home side. Brando Biddle (2-15) was the pick of the Geddington bowlers with two wickets, there was also a wicket each for Ned Wilson (1-3) and Brooklyn Biddle (1-7) for the away side.
Share via
FacebookTwitter
https://www.pitchero.com/clubs
Recent news