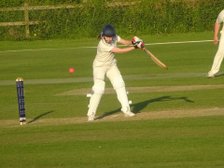 Match Picture: Poppy Gibson during her innings of 38 not out for Geddington Under-15's against Brigstock Under-15's At Geddington Cricket Club on Tuesday.

An unbeaten 69 partnership for the 3rd wicket between Poppy Gibson (38* off 34 balls) and Joshua Knight (28* off 21 balls) guided Geddington to their victory target with the loss of 2 wickets and 9.1 overs to spare. Harry Howell (2-25) took two wickets with the ball for Brigstock.

Earlier, Brigstock batted first and made 85-7 off their 20 overs, Howell (26) and Daniel De Choisy (10) got the visitors innings off to a good start with a 46 partnership for the 1st wicket, but then wickets fell at regular periods during the innings. Knight (3-0-8-3) took three wickets with the ball for Geddington, there was also two wickets each for Drew Peel (2-9) and James Hogg (2-18) for the home side.