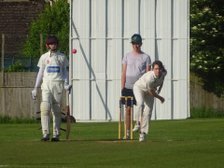 Poppy Gibson Takes Five Wickets For Geddington Under-15's In Their Victory Away At Weldon Under-15's.

In reply, Geddington reached their victory target with 2 wickets down in the 11th over, Zachary Byers (23*) and Cole McWilliam (22) got the away side innings off to a good start by putting on 47 for the 1st wicket partnership, before Byers and Ben York (11*) took the visitors to their winning target. J Harris (2-20) took two wickets with the ball for Weldon.