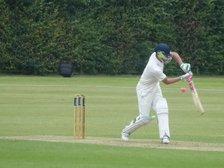 The two players that guided Geddington to victory in the Cup Final on Sunday were in the runs again, Cole McWilliam (51* off 21 balls) top-scored with a half-century and Ben York (33* off 13 balls) who was also in the runs guided the visitors to their victory target with 13 overs to spare and 9 wickets in hand, McWilliam and York put on an unbeaten 84 partnership for the 2nd wicket after the early loss of Connor Napier (13). Issac Baker took the only wicket to fall for Loddington & Mawsley.

Earlier, Loddington & Mawsley batted first and made 110-2 off their 20 overs, Rory Pateman (44*) top-scored with the bat for the home side, Ruban Singh (33) was also in the runs, Pateman and Singh put on 99 for the 1st wicket partnership for the hosts. Drew Peel (1-10) and Poppy Gibson (1-13) both took a wicket each with the ball for Geddington.