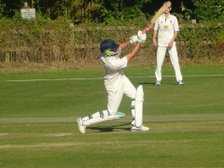 Match Picture: Cole McWilliam batting during his innings of 53 Retired Not Out for Geddington Under-15's against Kettering Town Under-15's At Geddington Cricket Club on Tuesday.

Geddington batted first and made 192-1 off their 20 overs, Cole McWilliam (53 Retired Not Out) and Akaash Baiju (50 Retired Not Out) both scored half-centuries with the bat for the home side, Sam Smith (44*) and Joshua Knight (27*) were also in the runs, Baiju, McWilliam, Smith and Knight put on an unbeaten 186 partnership for the 2nd wicket after the early wicket of James Hogg. Harry Turner (1-37) took the only wicket to fall with the ball for Kettering Town.

In reply, Kettering Town were All Out for 99 in 19.1 overs, Harry Tanser (40*) top-scored with the bat for the visitors, Mark Bambridge (14) was the only other batsman to reach double figures. Stanley Kirk (3-16) took three wickets with the ball for Geddington, Archie Colwill (2-6) and Ben York (2-12) also took two wickets and there was also a wicket each for Drew Peel and Hogg for the home side.