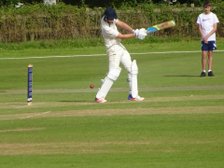 Two Wins Out Of Two League Games For Geddington Under-15's After Victory Away At Burton Latimer Under-15's.

Sam Smith (52 Retired Not Out) and Connor Napier (50 Retired Not Out) both made half-centuries for Geddington in their 155-1 off their 20 overs, before Joshua Knight made a quick-fire 29 off 13 balls towards the end of the visitors innings, as Smith, Napier, Poppy Gibson and Knight put on 151 for the 1st wicket partnership.