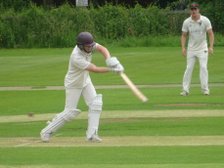 Daniel McDade Scores Unbeaten Half-Century For Geddington Under-15's In Their Victory Away At Kettering Under-15's Whites.

Daniel McDade (51 Retired Not Out off 27 balls) in an innings which included 5 fours and 4 sixes, top-scored with an unbeaten half-century for Geddington in their 126-4 off their 16 overs, Jack Edwards (19), Henry Brandrick (19) and Liam Cully (11) were the other main run-scorers with the bat for the visitors, with D McDade, Brandrick and Hanna McDade putting on 68 together for the 3rd wicket partnership. Luke Thompson (1-17), Vanik Singh (1-24) and Harry Bradshaw (1-27) all took a wicket each with the ball for Kettering Town Whites.