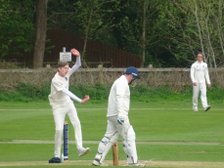 Geddington Under-15's made it three league wins in a row with victory by 47 runs against Brigstock Under-15's, at Geddington Cricket Club on Tuesday Evening.

Geddington batted first and were All Out for 118 in 16 overs, Daniel McDade (42 off 22 balls) in an innings which included 3 fours and 2 sixes top-scored with the bat for the home side, D McDade and Liam Cully put on the highest wicket partnership of the innings, with 53 for the 2nd wicket partnership. Ethan Hunt (3-0-14-3) was the pick of the Brigstock bowlers with three wickets, Oscar Hunt (2-11) and Hal Cubitt (2-27) both took two wickets each, there was also a wicket for Charlie Parton (1-12) for the visitors.