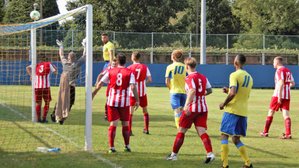 Buoyed by a stunning comeback draw against Long Eaton, the Miners started brightly with Kieran Harrison trying his luck from range in the opening ten minutes. His first effort was a free kick from 25 yards that didn’t clear the crossbar by much, whilst his second was an accurate drive that the Southbank goalkeeper was able to field pretty comfortably.

Striker Courtney Hastings was the next man to go close, shooting wide on the stretch after Millward had done brilliantly to squeeze a cross in from the right flank.

At the other end, goalkeeper Keaton Sharpe, who had been untested in the opening 15 minutes, was briefly forced into action. He showed good command of his area to pluck a lofted freekick out of the air and prevent Southbank from having an effort on goal.

The hosts continued to dominate possession before the first half drinks break. Tony Law might have broken the deadlock as he got free of his marker in the box but could not direct his header beyond the goalkeeper.

With half an hour played Millward struck to finally break Southbank’s resolve. Good work from Hastings in the penalty area saw him hold the ball up and lay it off to Millward who on the half volley struck it first time. The shot took a deflection off a Southbank defender which was enough to deceive the goalkeeper and take the ball into the bottom corner of the net.

There was a sense from the home side that the opener would be the first of many and they began to pile the pressure on. Hastings nearly had a goal of his own as he headed a Josh Thornton cross wide although the offside flag was belatedly raised. Five minutes later, Law did well to work a shooting opportunity in the box but from a tight angle but could only shoot straight at the goalkeeper who got his angles right to keep the effort out.

With the halftime whistle nearing, Southbank conjured their first meaningful chance of the game. A well worked corner led to one of their players finding some space in the penalty area but as he shaped to shoot, he missed his kick and the ball bobbled away for a throw in. It was, however, a stark reminder of the threat they posed.

A raft of changes were made at half time with three trialists, Cameron Thurgood and goalkeeper Matthew Simpson entering the fray in place of Law, Millward, Felix Hogg, Kyme Mason and Sharpe.

After a quiet first ten minutes of the second half, the substitutes began to have an impact on the game. Good footwork from one of the trialists saw him wriggle past the Southbank defence before shooting into the side netting. Thurgood then broke free on the left and drilled a menacing ball across the box, but no one gambled to get on the end of it.

Harrison then wreaked more havoc in the opposition box with another quality set piece delivery, but Charlie Roberts couldn’t get enough on his header to direct it beyond the ’keeper.

Law was reintroduced for the final 15 minutes and was increasingly influential. Twice he cut the ball back to the edge of the penalty area only to see one of the trialists shoot off target. Law himself did manage to find the target with a sharp turn and shot but the goalkeeper was equal to it and palmed it behind for a corner.

Thurgood had the final chance of the game but headed just over the bar seconds before the referee blew the final whistle. FT 1-0

The score line didn’t quite reflect Gedling’s dominance but marked their first win of preseason.

Goal scorer Curtis Millward said: “It’s always good to score. It bounced up perfectly to shoot. We had good possession, but we need to be more clinical; something to work on.”