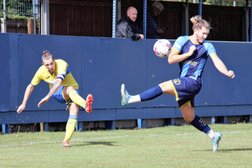 Gedling Beaten By Strong Ilkeston Side

Gedling Miners Welfare gave a spirited performance but were ultimately beaten by a superior Ilkeston Town side. It was no surprise as the visitors made their two division supremacy tell in an engaging contest.

For the first time since football restarted following the Coronavirus pandemic, Plains Road welcomed fans, and they were suitably treated to an action packed affair.

It was the hosts who made the brighter start and had the first clear cut chance after just five minutes. Captain Josh Thornton found some space on the left wing and worked a testing, low cross into the penalty area. His cross was met by a player on trial at the club but he couldn’t quite direct his shot on target.

Three minutes later, however, the same player didn’t make any mistake when the ball fell to him from six yards and he prodded the ball beyond Ilkeston’s goalkeeper to give Gedling the lead.

The visitors responded almost immediately with an equaliser, as Ollie Brown-Hill beat his man and fired a shot into the bottom left corner of the net.

It didn’t take long for Ilkeston to take the lead as a thunderous James Reid strike from the edge of the area put the visitors in front, during their very next attack.

Within five minutes of going ahead, Ilkeston had two more goals to lead 4-1 courtesy of an Alex Troke brace. Firstly, he expertly finished a swift team passing move before converting a penalty that was awarded after Zak Goodson had been upended. This meant the spectators had been treated to five goals in less than 20 frenetic first half minutes.

Gedling began to once again get a foothold in the game, showing much needed resilience after a devastating few minutes. Kieran Harrison’s well struck free kick from the edge of the penalty area was prevented from troubling the ‘keeper by a well timed deflection from the Ilkeston wall. The resultant corner dropped straight to Harrison on the edge of the area but his shot was narrowly wide of the target.

With just over five minutes of the half remaining, Ilkeston again hit Gedling with two goals in quick succession. Goldson fired a low shot into the bottom corner of the net before a minute later Nat Watson tapped in the sixth although there had looked a blatant offside in the build up.

Keaton Sharpe, in the Gedling goal, then prevented the deficit from getting any worse with a smart palm over the crossbar from a dangerous free kick.

As halftime beckoned, Courtney Hastings thought he’d pulled another goal back for Gedling only to see the assistant referee flag for offside.

The second half was a much more even contest and lacked the plethora of good chances that the first half had been filled with.

Matthew Simpson, on at half time to replace Sharpe in goal, was quickly called into action early on in the half and reacted with an excellent block to deny Goodson his second goal of the game.

With just over an hour gone, Gedling put together arguably their best move of the match. Thornton brilliantly weaved past two defenders and swung in a pin point cross from the right which Hastings met on the volley. The ball flew inches wide of the post with the ‘keeper completely beaten.

Kole Lambert then added a seventh for Ilkeston after Thomas Marshall had intercepted a misplaced pass from the Gedling backline.

Gedling reacted well to conceding the first goal of the second half and began to carve out good opportunities. A clever run from Hastings saw him get in behind the Ilkeston defence but he was thwarted by a good save from the Ilkeston ‘keeper.

One of Gedling’s trialists then made a similar run just a few minutes later and calmly rounded the goalkeeper only to see his shot blocked on the line and cleared away.

As the game moved into the final ten minutes, Ross McCaughey, combative throughout, won the ball back strongly on the edge of Ilkeston’s area and struck a firm effort at goal. However, good positioning from Ilkeston’s ‘keeper saw him field it relatively comfortably.

The final chance of the game fell to Ilkeston as Lambert looked to add his second of the match with a powerful strike from range but Simpson made a brilliant save with his legs to deny him on the stroke of full time.

Manager Andy Clerke said: “Ilkeston are a very good side, you see the squad they’ve put together; fantastic backroom as well. It was always going to be a tough game today. Their movement I thought was sharp. We’ve learnt a few lessons there, hopefully lessons I’d sooner happen now than the first couple of games of the season. We’re not going to feel sorry for ourselves, we'll dust ourselves down and be ready for midweek.”

Manager Chris Marks said: “I thought we started the game really well, then they had a good 20 minutes which cost us. We weren’t at our best first half but I thought second half we came out, we were a lot more together, looked a lot more organised. I think we were good for the second half to be fair.”