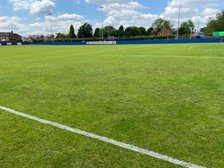 Plains Road was bathed in sunshine during a closely fought encounter, much to the delight of the 52 spectators who attended.

It was a cagey and low-key start to the game as both sides weighed each other up. This meant a distinct lack of goal mouth action early on.

It was the visitors who broke this trend and took the lead with the first real clear-cut chance of the match. Just over a quarter of an hour in, the two Long Eaton strikers combined with their number nine cutting it back from the right-hand side of the penalty area for number 10 to roll past the helpless Matthew Simpson in goal.

Five minutes later, Long Eaton doubled their lead. A good ball over the top split the Gedling defence wide open but the hosts recovered and won the ball back. However, captain Josh Thornton was caught in possession on the edge of his own box whilst attempting to clear his lines. He was severely punished as the Long Eaton attacker produced a composed finish.

Gedling upped the tempo after conceding for a second time and really grew into the game. There were loud appeals for a penalty for handball when Ruben Wiggins-Thomas’ shot was blocked but the referee waved away the protests. Shortly afterwards, a debutant striker hit the frame of the goal from an inviting delivery from a corner.

Long Eaton didn’t heed this warning and just a couple of minutes before half-time, Wiggins-Thomas pulled a goal back for the Miners. A low cross from the right was drilled into the box dangerously and Wiggins-Thomas coolly slotted home to set up an intriguing second half.

Clearly buoyed by the late strike in the first half, Gedling asserted their dominance on the game in the second half as they pressed for an equaliser.
It didn’t take long for them to conjure a good chance, as five minutes into the second half Wiggins-Thomas flicked a long ball on which put Courtney Hastings through on goal. The striker had to stretch to connect with the ball and as a result ended up steering the ball wide of the goal.

For all their possession, Gedling were struggling to create clear cut chances but the introduction of Niall Hylton changed that. Just after the hour mark he played a defence splitting pass to put Tony Law through on goal. Law kept his composure but was thwarted by the onrushing Long Eaton ‘keeper who managed to deflect his shot on to the post and out for a corner.

There was almost a goal from the resultant corner as Paolo Piliero’s pinpoint corner found Charlie Roberts whose header was well saved.

When the equaliser did come, about 15 minutes from the end, it was from a corner. Another dangerous delivery caused uncertainty in the Long Eaton ranks and the ball dropped to the edge of the area where a debutant controlled it well and fired a low shot into the corner of the net.

From that point, it looked as if there was to be a winner, it would only be one side, with Gedling clearly in the ascendancy. Hastings might well have grabbed it as he chested down Hylton’s left wing cross. However, his shot on the half volley struck the post and bounced harmlessly clear with the ‘keeper clearly beaten.

That proved to be the final chance and meant a fairly entertaining game finished all square.

Gedling manager Andy Clerke said: “First of all big thanks to Long Eaton they’ve dropped in at the last minute for us so really appreciate the efforts of Jake Wood and Ian Deakin for getting that organised today.

“We’re off the mark, we’re up and running, we haven’t played with purpose now for such a long time, and pre-season is about purpose, is about growing into the season and overall I’m relatively pleased today.

“They’re a good young side, they’re fit, they’re well organised and so from that perspective pleased to not get beat, got back into the game and more positives than anything to take.”