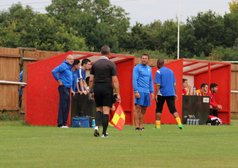 Stalemate at the Baytree Cars Stadium

The second goalless draw away of the season away in Borrowash maintains the Miners unbeaten start to the season.

Although both teams tried as they might to get a result, the Referee did nothing to help in the overall performance.
Inconsistency, odd decisions and a basic lack of understanding seemed to spread to the players in their attempts to provide anything resembling a competitive game of football. As early as the 15th minute Mr Allen set the seal on one of the most inept display I’ve seen in many years. He failed to play an obvious advantage after a foul by home ‘keeper Martin Apenitis and whistled to stop play just as Harry Simpson was about to cross the ball into the home box with the ‘keeper nowhere.
More bizarre was his decision to send Martin Holt off on the long walk to the dressing room to discard an under garment !

Both teams had early decent half chances but both custodians were alert and defences hard to penetrate. The first half meandered on with no side able to get their noses in front.

The second half saw an improvement from Gedling, with substitute Felix Hogg, playing his first game in the yellow and blue for over 2 years, prominent. More strange refereeing just past the hour mark saw three Miners players booked within the space of 5 minutes in a game that could never be classed as dirty.

As the game wore on Gedling pressed forward for the winner and Prims attacks were few and far between with Scott Miles a virtual spectator. Another tidy performance from the back line and signs that the team are beginning to gel into an effective unit. A little more fire-power in the final third would not go amiss though.

OK ~ so no goals or exciting goalmouth action to report but I’m sure the Gaffer and his team have seen enough in the opening fixtures to augur well for a successful campaign.