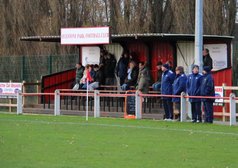 Gedling went into their trip to Leicester on a bitterly cold afternoon without 3 senior players and a match reporter (again).

Manager Jonathan Simpson went into the game with Scott Miles in goal and a back four of Felix Hogg, Captain for the day Ian Robinson, Stephen Brett and Mark Ballard who came in for the injured Harry Simpson. The midfield carried two changes from the team that lost to Ashby last Saturday with Tom Watson away at the races and Anthony Brown unavailable, which opened up opportunities for the returning from suspension Martin Holt and from injury Joe Hopper who joined Jordan Whitehead, Malaky Eshelby and Rackeem Reid in the middle of the park. Dalton Stephens continued ‘up top’ as the target man.

I also mentioned the AWOL match reporter again Ian Williams who cried off late and posted something on Facebook about the Blarney Stone. Hence another short report from myself.

Gedling started the brighter of the two sides and had numerous chances to open the scoring before they did just that in the 13th minute through Martin Holt who drove home his first goal for the club at the far post after some great build up play by Rackeem Reid, Jordan Whitehead and Joe Hopper. So Gedling were in front and almost held out until half time when they conceded a penalty though a foul committed by centre half Steven Brett who tugged at the arm of a Aylestone striker, some would argue he was the last man and should have seen red but thankfully for Gedling the referee deemed it as a yellow and discussion’s at half time with club officials from both sides thought the referee Steve Kings got the decision right. Richard Lewis tucked away the penalty for Aylestone and we went into the break all even.

Gedling again started the second half well and should have taken the lead again on 49 minutes when striker Dalton Stephens found himself alone in the 6 yard box with the keeper to beat , however the keeper did well to come out and block Bombers shot before he found the net. Aylestone themselves were in front within a minute when a breakaway saw ex Barrow Town midfielder Liam Donaghy tuck away the ball after some fine build up play by the Aylestone midfield. It was all Aylestone now although Gedling were thrown a life line after a coming together of players resulted in Aylestone’s number 10 being sent off for an elbow. Gedling could not take advantage of the extra man and Aylestone extended their lead in the 62 minute when Liam Donaghy jinked his way in from the right beating 4 players before sliding the ball past Scott Miles to find the net, another goal was to follow for the hosts through the impressive Sam Hankin who slammed a 25 yard free kick into the top corner past the now despairing Gedling keeper. Gedling wow’s got worse as the game reached its conclusion as Stephen Brett received a second yellow card for a foul and was walking off the pitch well before the referee produced the card resigned to his fate. Aylestone had the final say in added time when Luke Winfield added a fifth so seal a fine victory for the home side.

Overall Gedling were beaten by a better side on the day, they never came out the dressing room in the second half and to their credit Aylestone took full advantage of that and deserved their win. Let’s hope we can make up for it as we visit local rivals Radford next Saturday.

Man of the Match again has gone to Rakeem Reid, who caused problems in the first half with his raids down the wings.