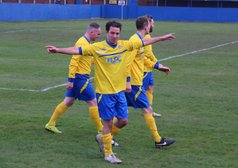 "Bend it like Ballard" earns a point for the Miners

The home team took the game to their opponents from the off and it was one way traffic for three first 20 minutes or so. The visiting strike force of Graham Wells and Julian Joachim were kept quiet for the most part as Gedling swept forward and deservedly took the lead half way through the half. A Joe Hopper corner was not cleared with any conviction and Tom Watson was on hand to volley home the opener. Eight minutes later and the dangerous Watson was felled in the area and Jordan Whitehead made no mistake from the spot kick.

Still Gedling powered forward and Reid and Joe Hopper were unlucky not to increase the home lead.

Four minutes before half time and the game suddenly turned. Joachim showing the undoubted class of an ex-professional turned on a sixpence in the box to fire home a pass from Wells and, then, a couple of minutes later returned the compliment to Wells who equalised on the stroke of the whistle.

A shade harsh on the Miners who had bossed the game for long periods.

Gedling continued to press forward and Liam Moran was unfortunate not to add his name to the scoresheet with a fine effort well saved by Wood.

The go-ahead goal came from the visitors ~ a high ball was not dealt with by Miles and his defence and Wells was on the spot to bundle the ball home. Some might have argued that Miles was unfairly bundled over but Mr Burt thought otherwise and awarded the goal.

It looked as though the game was slipping away from Gedling but no-one told sub Mark Ballard who collected a reverse pass from Reid and shot high and wide into the top corner from 20 yards to level the contest.

A fine finale to end on and delight for the Miners who fully deserved a share of the spoils.