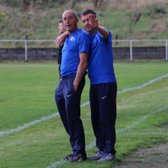 A pretty non-descript game of football in all honesty. Little threat up front and no midfield cohesion.

Although the defence held firm for the most of the game they were broken by Liam Oliver's goal 13 minutes from the end of a dire encounter.

The Management team can only do so much in terms of coaching and instruction ~ it's the 11 players that should be relied upon to ultimately impose themselves in order to gain anything from the game. 50 yard lumped balls from the back lumped into the channels to non-existent forwards will get you nowhere at this level.

Time for the playing squad to get real and play for the shirt or else I fear a long hard winter ahead.