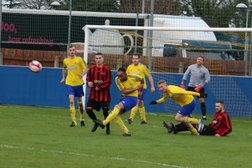 Sterling performance from the Miners

Gedling entertained a Barrow side in the knowledge that in the two recent games against the Riversiders had resulted in the Miners defence shipping in 11 goals.

The home side took the game to the visitors from the off determined to make a fight of it this time around. Scott Miles in the Gedling goal was called upon, however, in the very first minute when dangerman Zak Ginvert unleashed a shot but was denied by a good save.

The hosts went ahead on 10 minutes, Eugene Francis slung over a corner from the left and Jack Hopper took advantage of some poor Town marking in the 6 yard box to head over Adam Brightwell for the lead. Barrow continued to power forward and Schulz went close with a fine header. The game was tied up on 23 when Ginvert outpaced the defence to a through ball to slide the ball under Miles for the leveller. Barrow are a very strong team on the counter attack, but things weren't going all the visitors way as Jack Hopper and Chris Hall forced Brightwell into making fine stops.

1-1 a fair reflection of the half at the break, Barrow breaking with pace and the Miners causing concerns in the visitors box.

Within 90 seconds of the re-start Miles was called upon to keep his side in the game with fine stops from Schulz and Dan Agar. Almost a quarter of an hour into the half and a penalty. Joe Hopper was adjudged to have impeded Schulz and Mr Gray pointed to the spot. Agar hit the ball sweet enough but Miles saved superbly down to his left.

His save seemed to breed confidence in the home side and some good football ensued. It was the visitors who got their noses in front after 63 minutes. Full back Sam Beaver was allowed too much room as he advanced in the left channel and his shot sailed over Miles into the far top corner for the go-ahead goal.

Not to be outdone, Gelding still drove forward and were rewarded with the equaliser 10 minutes from time. Substitute Charlie Roberts, on a powerful run, was upended just outside the box. With a half decent wall in place the Town defence could do nothing to stop Joe Hopper's super direct free kick beating the wall leaving Brightwell clutching fresh air.

It was no more than Gedling deserved in a super game of football. A month ago home heads may have dropped but there now seems to be a strong self belief in the team with all 11 fighting for the cause with a togetherness lack has been missing recently.

Gedling Man of Match
Scott Miles
..vital saves at vital times and that penalty save