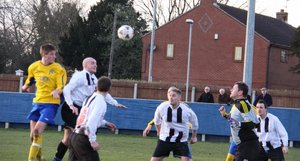 Both sides knew the importance of this fixture with a precious three points at stake and the football showed as both sides went for goal from the off. Good wing play from Rhys Jeffery put in Brad Wells and his astute pass saw Danny Gee a yard out who managed to blaze over, On 14 a counter attack from the visitors saw Carl Benson break down the left and send an inviting a low ball across the face of Gareth Ellis. Sam Saunt was the grateful recipient at the far stick to open the scoring.

The lead lasted barely 6 minutes though and Jeffery again fed Brad Wells whose effort rebounded off the post. Brother Kieran was first to react and blasted home for the leveller. Both teams strode forward in an entertaining game and Gee again went close as did Saunt for the visitors, but it was the Miners who looked as though they could add more in every attack. Home debutant Pavinder Singh had to leave the field just before the break. The go ahead goal arrived in injury time. Jeffery floated over a cross from the right and Wells rose highest among a crowd of defenders to glance his header in off the post and go in a goal to the good.

The second period saw Ellistown equalise on 48. A soft free kick was awarded some 22 yards from goal and Benson despatched the ball low and hard for 2-2. Saunt again caused problems for the home defence and should have scored but for Ellis. Manager Muldoon introduced Luke Stanley from the bench and almost immediately the midfield sprang to life. In the 62nd minute Stanley’s fine approach play fed in Brad Wells from the right who made no mistake from 8 yards. Three minutes later and the duo produced almost a carbon copy. Stanley slung over a cross from the right and Wells only had to beat keeper Paul Madeley to the ball and poke home for his hat-trick.

Still Gedling bombed forward in search of a welcome win and Jeffery and Gee again went mighty close to wrapping the game up. Ellistown sensed a mini come back on 82 as sub Craig Dawson cottoned onto a long ball out of defence which completely split the home defence. Dawson strode on and executed a perfect lob beating the advancing Ellis for 4-3

Considering the position of both sides in the table, this was a thoroughly entertaining game from two teams content on providing a spectacle for the cold crowd.

Despite a “handbag” melee two minutes from time and a nervous last 10 minutes Brad Wells saw the game out with his fourth and his side’s 5th. The ball wasn’t completely cleared from the left of Ellistowns box and Jeffery fed the advanced Gee whose shot was charged down. As the ball ran loose Wells despatched it beyond and under Madeley to wrap the game up.

A much improved performance from the Miners in recording a welcome win. Maybe the pre-match music should now be “Brothers in Arms”