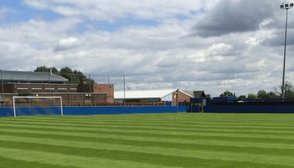 Miners get first win at home on the board

Miners get first win at home on the board

The game started at a frantic pace, both side having half decent chances within the first 10 minutes. Home striker Luke Armstrong narrowly failed to connect with a clever overhead kick after a cross by Tyrone Cairns. Despite early Gedling pressure it was the visitors that went ahead in the 15th minute. Jack Kyte picked the ball up in the inside right channel, strode into the area fired his shot across Carl Najuk into the far corner. Nick Morgan crossed for Armstrong to narrowly head over and Lewis Capewell almost scored with a fine effort from distance which only just cleared the bar. Ibstock were not without chances and Andy Fell tested Najuk and Kyte again went close.

Cairns spurned a great chance to level when he cleverly beat his marker in the box but the ball cleared the bar. The equaliser came after 35. Capewell won a ball from Josh Lovitt in midfield and fed a delightful ball into the path of Rhys Jeffery on one of his now customary dashes forward. The little winger didn’t have to break stride as he unleashed a shot which flew past Jordan King.

Gedling were now in the ascendancy with all their good work coming down the right with Morgan and Chris Muldoon, in an unfamiliar forward role, running the show. At the back Simon Labatte and Chris Peet were doing a fine job of keeping Kyte and his fellow attackers quiet.

The second period bought much of the same with Morgan again going close and Cairnss drive stopped by a fine save from King. For the visitors Lee Barton whizzed a free kick goalwards, but Najuk was equal to it and turned the ball away for a corner. The trickery and close ball control of Jeffery was causing problems for Ibstock and, after another darting run, King did well to deny Armstrong’s final effort. In the 60th minute Gedling finally went ahead. Another finely flighted corner on the right was not cleared with any conviction and Peet was on hand to fire home into the corner.

Two minutes later substitute Colin Woodward had a great chance from 5 yards but his hurried shot ballooned over the bar with King helpless and Capewell grazed the bar with a fine effort. Now the Miners tails were up and Cairns again went close to adding to the lead.

Ibstock’s attacks were becoming few and far between, but there was a scare for the home side when a delightful lob from Sam Adams only just missed the far post. Gedling held on to record their first win under their new Management.

A hard earned, gutsy win and a fully deserved three points in a game that could hardly be described as a classic – more like mission accomplished !!