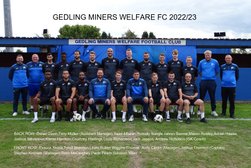 EMCL game away to Blaby and Whetstone Athletic FC

Miners go down by the odd goal in three

Despite taking an early lead Gedling came away from Leicestershire with nothing. An own goal on 14 and a late score from Toby Warner ensured that the Miners returned home with another defeat.

Danny Gee and Brad Wells made their debuts for the Miners.